ADA Compliance – What You Need To Know

Two years ago, many website owners were scrambling with GDPR compliance: the new privacy rules in Europe were reaching the US.

Now it is ADA Compliance – the Web Content Accessibility Guidelines related to  the Americans with Disabilities Act from 1990 that gives headaches to website owners. Title III of the Americans with Disabilities Act (“ADA”) covers the private sector. It prohibits discrimination based on disabilities in “places of public accommodations, commercial facilities, and private entities” that offer “certain examination and courses related to educational and occupational certification”.

Even after undergoing several amendments in 2008, the ADA does not explicitly address online compliance. With no specific rules under the law, it falls to the courts to determine how ADA standards apply to websites—or whether they do at all. From a legal standpoint, ADA compliance is a surprising grey area.

No Regulations Leads to Lawsuits

Although in 2017 the Department of Justice declined to establish regulations on that matter [in the reversal of a 2010 announcement], another lawsuit that was filed in 2017. It ruled that a grocery chains website was required to be accessible for clients with disabilities.

Now, the accessibility to websites and the ability to browse them, maybe even order products come under the microscope:

New lawsuits are being filed, and one of them has reached the Supreme Court, being rejected on October 10, 2019. The tendency shows that your site better be compliant:

As you’ve probably figured out by now, the answer is no, because it’s not at all clear how or even if ADA rules will be applied to any particular website. Still, it’s generally a good idea to be cautious. While many states have adopted their accessibility laws, the volume of accessibility-related lawsuits filed against websites has increased in recent years. Not only that – plaintiffs have been more and more successful in these lawsuits. With no clearly defined regulations to follow, it is not worth to gamble but to have a hard look at the guidelines outlined in the latest, WCAG 2.1 that was released in June 2019

What is WCAG 2.1 in ADA Compliance?

In June 2019 the Web Content Accessibility Guidelines were updated from version 2.0 to 2.1. The updates in 2.1 cover changes in technology that have occurred since the previous version, and also address areas that were underrepresented in 2.0. What does this mean for you? Not a lot right now. The compliance level targeted is still WCAG 2.0 Level AA, and the 2.1 success criteria are in addition to those already existing in 2.0.

Although not required by law, it is recommended to use WCAG 2.1 as a guide to make your website ADA compliant.

What Are Examples of Compliance With WCAG?

Headlines are an important factor in structuring a document. In web design, they are an essential part of search engine optimization. In WCAG guidelines, we need to pay attention that the headlines hierarchy from H1 to H6 is not being interrupted. H1 has to be followed by H2, which should be followed by H3 and so on.

Navigation: Navigating through a website without a mouse should be easy, the document hierarchy should be kept as mentioned above.

Forms: Form fields should be labeled properly. This includes “watermark” labels inside contact forms – see the contrast rule above.

All images should have an alt text that describes the content of the image for visually impaired people. Image descriptions should not repeat.

Links: Links to other websites that open in a new window or tab need to be marked clearly, better avoided.

Links should also be clearly marked as such, with rollover hover effects.

Buttons: it is recommended to avoid multiple buttons to the same destination

Absolutely! People who are blind, visually impaired, or learning disabled often use screen readers. A screen reader is a software that attempts to identify and interpret what is seen on the computer screen. Screen readers are one form of assistive technologies that help impaired people access computers and the Internet.

What Shall I do?

Waiting is not a good idea and the situation – several law firms are specializing in ADA lawsuits. It is better to get your website in compliance with the regulations soon.

What Are the Costs?

We have made client websites compliant for as little as $200. Depending on your website, there may be little or lots of work to do. We changed to a new system years ago. Our new system is easier to adjust for ADA compliance. If your website is several years old it might be better to look at the redesign with a new theme somewhere between $500 and $1000. 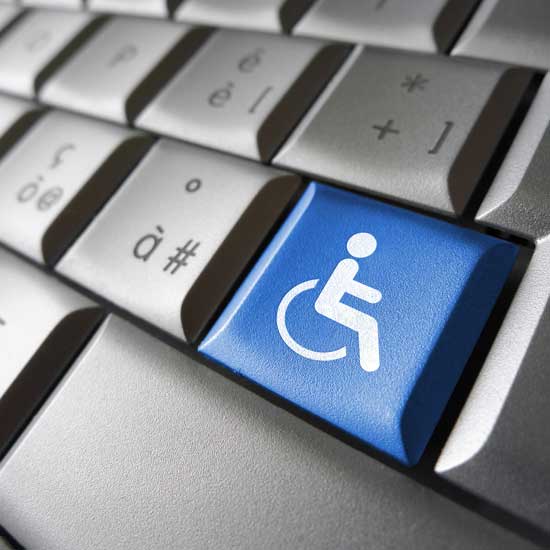 ← Previous: Why Have a Separate Email Server? Next: How to Empty Your Browser Cache →